Jungling as a term is technically a reference to the act of killing neutral monsters. What many will refer to as jungling, however, is the act of a single champion roaming across the map, dedicating themselves exclusively to the farm available in the jungle and the neutral monsters that occupy it. A player that does this is referred to as a jungler, and the jungle itself refers to any area of the map that is not a lane or part of either team's base, including the river that divides it.

The primary reason for jungling is resource allocation. The jungle offers a lot of minerals and experience that can be accessed through slaying the monsters that spawn and respawn in predetermined locations on the map. With a lone player dedicating himself to accruing it, it leaves two solo lanes available to each gain high experience and gold rather than only one solo lane. In effect, all accessible resources are being utilized by a team with a jungler.

There are other important tasks that a jungler is expected to perform, due to their roaming nature preventing enemy champions from spotting the jungler through the fog of war. This allows for unexpected positioning and surprise attacks, such as during ganks and counterganks. Their ability to freely traverse the map without being tied to a lane also allows them to support lanes when in the area, such as warding key locations without forcing an ally to abandon their lane temporarily and coming to their aid when they come under duress. 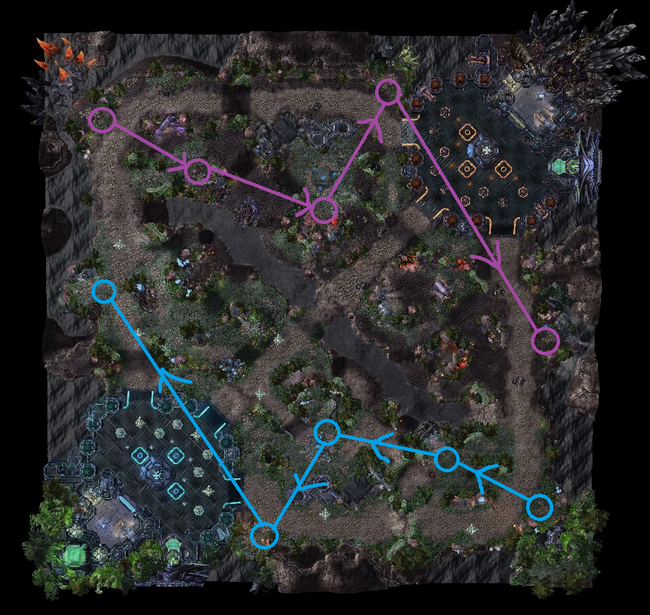 The picture above showcases a standard Jungle route for the first clear. At the end of the clear, one can either choose to gank the hard lane or try and steal the opponent's jungle since this is the point where the Jungle respawns.